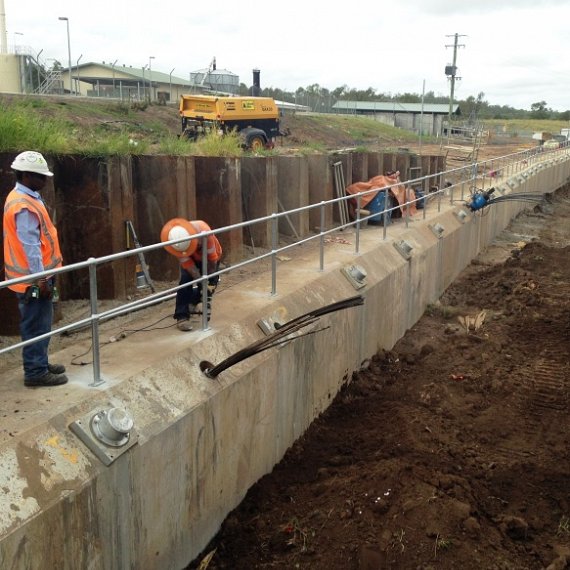 The project is to enable the berthing of Landing Helicopter Deck (LHD) warships at Fleet Base East (FBE) Wharves 1 to 4 at Garden Island, Woolloomooloo. The project is in two stages, first is the AWD & LHD SPO/TLSF Building then the construction of 4No of Storm Bollards located within Wharves 1-4.

In June 2013, South East Queensland Water (SEQ Water) awarded Avopiling the contract that included a deep bored pile retention wall, permanent anchors, a deep capping beam and various ancillary civil work packages. The project was classified as a critical infrastructure project as an existing landslip that had been exacerbated by recent flooding was threatening the stability of two high pressure water mains that fed Ipswich via the treatment plant at Goodna. Avopiling acted as the Principle Contractor for the Project.

In order to safely set up the piling rig on top of the slip patch a detailed investigation was completed to test the stability of an existing road that would form part of the piling platform. Once the two rigs, cranes and polymer plant was established, the piling work ran from August until October 2013.

Despite the challenging ground conditions including a high water table and deep band of loose gravels, all 60No 1200 mmØ piles to depth  of 30 meters were constructed with the use of a polymer/bentonite mixture to act as bore support which in turn facilitated a deeper rock socket due to a possible lack of adhesion.

A heavily reinforced capping beam structure, 2m deep by 2m wide cast in situ member was built and shaped in a chamfered profile on one edge to house the future anchor plate. The construction of the beam was carried out in house with the assistance of formwork subcontractors. After completion of approximately half of the beam we mobilised a ground anchor machine and conducted three trial anchors to verify the anchor design. With the tests complete two percussive rigs were utilised to drill 34 deep ground anchors. Each anchor consisted of 12 strands of 15.2mm diameter high tensile (super grade) strands that extended into the competent siltstone rock 34m into the ground. Each anchor was grouted and locked off at a working load of 3000kN.

The project is to enable the berthing of Landing Helicopter Deck (LHD) warships at Fleet Base East (FBE) Wharves 1 to 4 at Garden Island, Woolloomooloo. The... 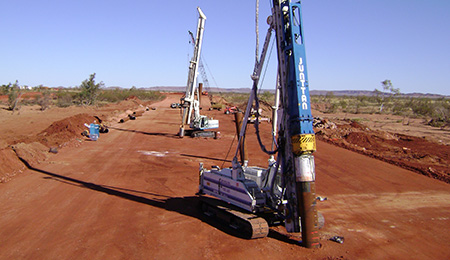